Is Sustainable Tourism an oxymoron?

The United Nations has declared 2017 as the International Year of Sustainable Tourism for Development.
The UN states that tourism, as one of the largest and fastest-growing socio-economic sectors of our times, can stimulate economic growth, creating jobs and business opportunities that can help people escape poverty and improve their livelihoods.

But is Sustainable Tourism an oxymoron? 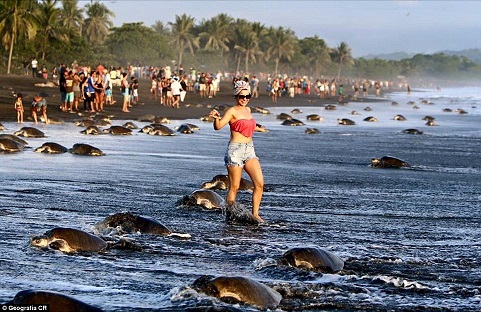 Firstly, consider some ecological impacts from tourism: carbon emissions from transport especially by air; pristine wilderness that is no longer so pristine once it is on the tourist map. Secondly, let's think about the impact on culture: do many tourists actually gain a real understanding of a new country and its people. Finally, think about the actual economic benefit for many local people: does a resort buy local food and employ local people? Was a local person coerced into selling their land to a developer for a lot less than it is really worth?

As more people throughout the developed world have the opportunity to travel and be a tourist, the quest for new and interesting places to visit grows. According to the International Union for Conservation of Nature (IUCN), many natural sites are areas that are recognised as sacred by indigenous and traditional peoples or recognised as places for worship and remembrance by faith and religious groups. Some are among the world's oldest conservation areas and contain high levels of biological and cultural diversity. These areas provide protection for diverse species as well as traditional customs and practices and highlight the necessary mutual respect between people and nature.

But in today's globalised world, this respect and connection is not adequately recognised or understood and is becoming increasingly under threat. If we continue to promote development at the expense of the natural world we may destroy significant areas through ignorance, overconsumption and overexploitation of resources.

Tourism can only be sustainable if it maintains and restores meaningful relationships between humans and nature.