The Faith Ecology Network(FEN) is an interfaith network of people connecting faith with ecological awareness and care.  This video is a useful starting point for school students doing Studies in Religion.

Andrew Skeoch addresses the fundamental question of our human relationship with the living biosphere, by sharing his reflections on a lifetime collection of spectacular recordings and visual of all creatures, great and small.

“Tuning in to these sounds takes us on a journey of discovery into what nature is saying, and the living processes of whole ecologies. As we listen carefully, we begin to comprehend the languages of the natural world.”

Andrew walks us through a sonogram in more detail, and reflects on competition and cooperation in the Natural world.

You can also watch Andrew's presentation to TedX in Canberra, delivering a succinct talk consolidating his key understandings. Also, one of his several presentations at the Woodford Folk Festival was recorded by the ABC and broadcast on its 'Big Ideas' program. If you loved the soundscapes (and we all did) he has a massive collection you can listen to for free, or pay to download a high quality version.

The Land Water Fire ceremony which began the event

The opening ritual and Acknowledgement of Country for the Deep Listening in the Natural World seminar, Faith Ecology Network, October 12th, 2020, held on Country at La Perouse, Sydney. This ritual was prepared by the team from the Aboriginal Catholic Ministry at La Perouse, led by Lisa Buxton, whose Country is Bundjalung.

Several intergenerational reflections on the idea of "Deep listening to Nature," from various faith traditions, can be found in the event playlist 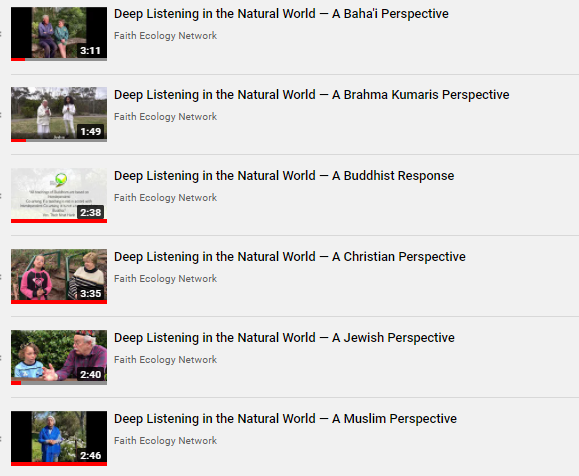 Journey of the Universe Film Screening