Meditation and the Environment

The Environment Meditatio held in Sydney 22-24 April was a ‘transformative’ experience for the 350 people who attended. Bringing together significant speakers from the various disciplines of theology, philosophy, science and spirituality, it was both a sobering reminder of the ecological crisis we currently face and an inspiring call to action. Two FEN members, Mona Javam and James O'Brien, share their thoughts 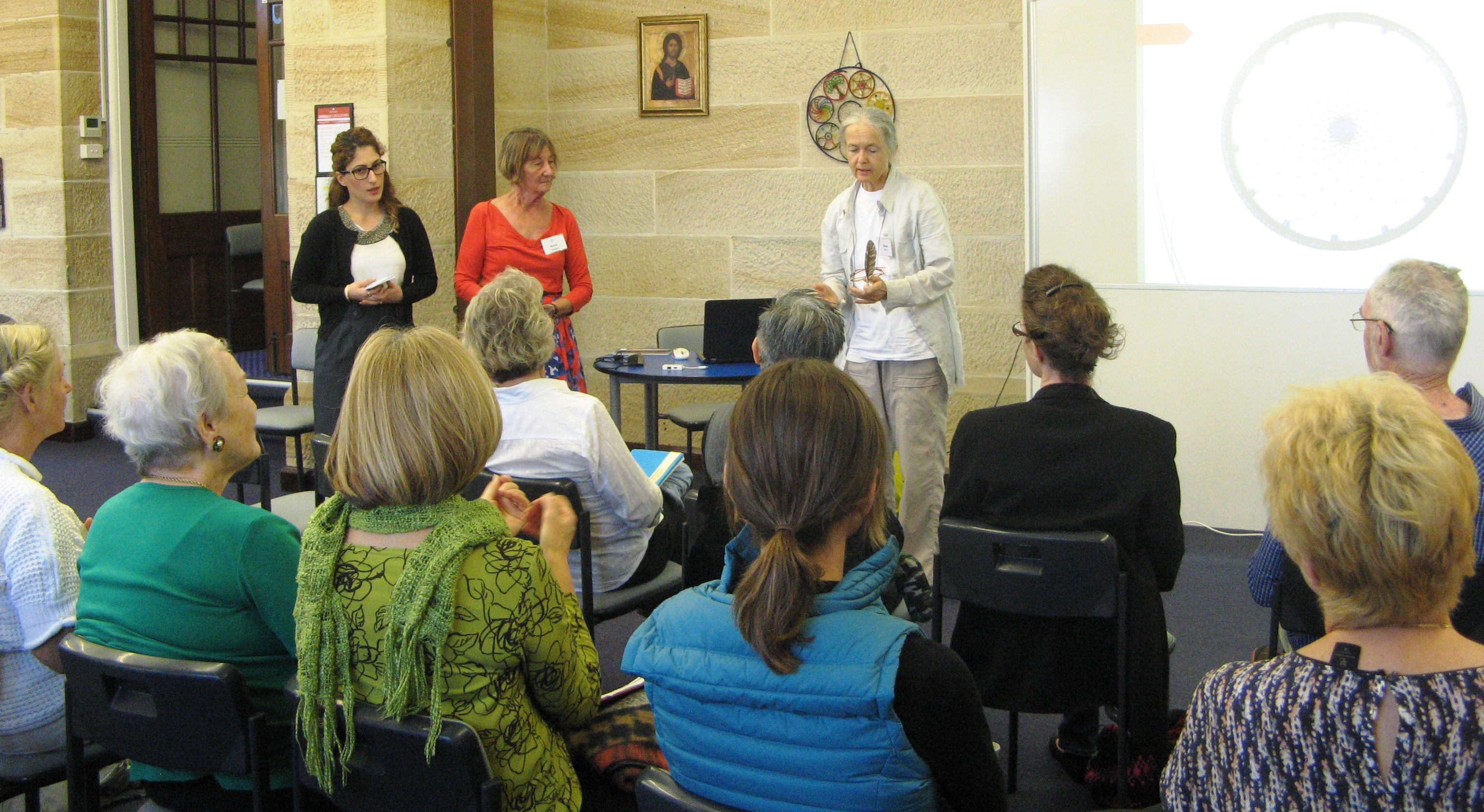 Meditation and the Environment in Islam - by Mona Javam

Reflection is essential in Islamic spiritual practice. It is what gives life meaning and essence. It is the light in the heart that allows the believer to discern what is good and evil, beneficial and harmful, beautiful and ugly. Again, it is through reflection that the universe becomes a book to study, and the verses of the Qur’an disclose their deeper meanings and secrets more clearly. The Arabic word for reflection is Taffakur which means to reflect, meditate cogitate, ponder muse speculate revolve in one’s mind, think over, contemplate, and consider. This word is mentioned in the Quran 17 times. E.g. in chapter 35 verse 3 it is said: “O humankind! Remember and reflect on God’s favours upon you.”(Fatir, 35:3). There is also an entire chapter (chapter 55- Rahman [Beneficent] dedicated to God’s mercy and blessings to humanity. we are also reminded to reflect, as a moment’s reflection is said to be better than night spent in prayer.

The natural environment is one of the three ways Muslims get to know God, as it is created by Him. We learn a lot about his Names and Attributes and His Perfection through His Creation. There are many verses in the Qur’an that describe elements of the natural environment, followed by saying that these are signs for people to think and reflect.

“And whatsoever He has created for you on the earth of varying colours [and qualities from vegetation and fruits] and from animals. Verily! In this is a sign for people who remember.” Qur’an 19:13

For example, we see God’s attribute of the Sustainer being manifested in nature as every species has been given something to eat. His attribute of the Merciful and the Compassionate is manifested when we see birds and animals feeding their young. When we consider the precise detail of the Creation of one ecosystem (let alone the entire earth and universe), we see that each species depends on another species, despite reproduction rates, no species becomes extinct or too populous. And despite this intricate detail the species all display beauty. Through this God’s Wisdom, Intelligence, Perfection, The All-Powerful, The Mighty, Source of Beauty, Source of Balance, the Creator are manifested. When we see sunset we can see the names manifested again as we reflect on God’s ability to take gas and light and make sunset different every day.

Has anyone seen the short film/documentary “How Wolves change Rivers”?. It’s a short documentary about how a degraded national park is rescued and regenerated through the introducing of wolves in that area. The state of the national park was that it was only dominated by dears and so introducing the wolves initially they started eating the dear but after some time they started to change the behaviour of the dear, the dear then started to avoid certain part so the park like valleys and the gouges and immediately those places started to regenerate. In some placed it lead the height of the trees to grow about 5 times more in length, then the birds started moving in, the number of beavers started to increase. And the dams they started to build provided habitats for the number of fish, reptiles and amphibians. The wolves then started to kill coyotes which increased the number of mice which then lead to increased hawks and badgers. And then finally the rivers stared to erode the land less, more pools formed which was great the forest to regenerate. This story is an amazing story, it teaches us how detailed, interconnected our ecosystems is.

In the Islamic tradition our purpose in this life is to know God, and to know him we must seek him. In seeking we must reflect and think about his creation. And so therefore contemplate about the environment, our blessings, and connect to the environment. Names and attributes of God are also used for reflection and meditation. Example our newly formed Environment team at ISRA runs bushwalks and as an activity we ask attendees to reflect on a particular name of God/attribute of God that they may have noticed manifested through nature during the walk. (diversity, balance)

How can meditation assist in helping with dealing with the current environmental issues?

So having said that we can use mediation to reflect on this issue and look within ourselves, our habits, values, our actions and their impacts on all forms of creation i.e. environment and other human beings.

Meditation assists in not only connecting to our environment but also to realise that the individual is responsible and has a large role in environmental issues. Meditation and reflection can lead to the realisation of the missing element within ourselves. It can assist in realising that the solution lies within ourselves. Meditation facilitates: Gratitude, Humility, Accountability, Respect for nature such as animals, plants etc., increase in Faith, Increase in certainty, and Cleansing of spiritual faculties & Nourishment of the connection with The Divine. Furthermore leading to the realization that environmental issues/crises are basically an outward crises of the deep inner crises of the soul. It is a crises in a relationship with and our perception of “nature” and a big part of this solution lies on the recovery of the soul i.e. connecting with our sacred traditions. Science and technology cannot do this, it is widespread secularisation of society that lead to this. i.e. Greed and love for consumerism has lead us some of the damages to the environment that we see today.

Meditation and the Environment – its role? by James O’Brien

Over the weekend of April 22-24, a seminar on “Meditation and the Environment” was hosted by the Australian Christian Meditation Community and Meditatio, an outreach of the World Community for Christian Meditation. The director of the world community Laurence Freeman OSB provided a space for meditation at the beginning and end of each day, centering the rich array of speakers’ input on the ecological crisis around a common contemplative practice. Twice a day there were 300 people sharing twenty minutes of sheer silence and stillness. So what role does the practice of meditation play in both nurturing our care for the earth and encouraging us to act?

The scene was set by scientist Professor Mark Diesendorf with a description of the profound destruction the environmental crisis is causing. Climate change is combining with our vicious economic system of greed and the “arrogant belief that we live independent of nature.” Professor Diesendorf argued that meditation can open up our minds to change course, which is especially important now that we need to organise for collective action.

With the need for transformation so great, Zen Roshi Susan Murphy spoke of how in meditation “we become equal to the fear of the unknown.” Indeed meditation is “a poised openness, ever alive, seamless and boundless.” In today’s culture we are driven by Acedia to always “move off,” to lose our attentiveness, to be caught up in the spin cycle. Murphy quoted Paulo Freire that “What is most important is the beautiful daily struggle to be congruent.” She concluded that in light of the ecological crisis we are invited to “accept the offer of this moment. It’s both frightening and invigorating.”

It was important to hear Catholic Earthcare’s Simon Habel give a workshop on Pope Francis’ groundbreaking encyclical Laudato Si, which definitively brought care for creation to the heart of Catholic Social Teaching. He finished with a question: If nature is filled with words of love, how can we listen to them amid constant noise and activity? Quoting Francis, “the external deserts in the world are growing, because the internal deserts have become so vast” (LS, 217). There is a need for liberation from the human roots of the ecological crisis, Pope Francis said. Indeed because the crisis is both social and environmental, we need to both “hear the cry of the earth and the cry of the poor” (LS 49). St Benedict would invite us to “listen with the ear of the heart” and then respond.

Here lies the importance of the practice of meditation, which centres, encourages, and energises us for our work in the world. Pilgrim and storyteller Donna Mulhearn gave witness to the transformative role meditation can play in our lives, helping people “connect with the source of love.” With fruits like a growth in courage, “active hope,” and faithfulness, anything is possible. What is needed is an age old balance of action and contemplation, for as Quaker leader Ro Morrow intimated, “from silence we can understand our role and position as part of the solution.”

Academic David Tacey strongly argued that the “Indigenous worldview is similar to the one that ecological conversion requires and demands.” This “ecological conversion” is a phrase coined by Saint John Paul II in 1982, meaning a process whereby the effects of the life of faith are evident in our relationship with the world around us. As Ngangiwumirr woman Miriam Rose Ungunmerr-Baumann once said, “we all have to try to listen to the God within, to Country, to one another.” Indeed as historian and Warraimay woman Vicki Grieves said, knowledge of the Indigenous people - who have lived with the land since the Holocene - will nurture us today. National Parks ranger and Darug man Chris Tobin spoke of the Aboriginal gift to the world as the knowledge that humans can live peacefully with the land. “There is not an Aboriginal problem but a rest of the world problem. We never had slavery, jails, fences, rich and poor.”

As capitalism compels people to live extravagantly, we need ears to hear and a heart to respond to the wisdom of the people of the land. Our Indigenous people are gently inviting us to grow, change, and follow what is most important. People like Vicki Grieves explain to us that Country is expressing itself all the time. If we but listen with the heart we may realise that the present ecological crisis is a crisis of relationship with the land. We are not recognising the gift we have been given and we keep treating it like a possession. As Indigenous elder and Ngarinyin Lawman David Mowaljarlai said in 1995, “all we want to do is come out from under all of this and give you this gift.”

Faced with the needs of the earth, Ecological ethicist and Anglican minister Byron Smith quoted Joanna Macy “having pain for the world.” This kind of feeling with the earth is a fruit of a contemplative awareness born of meditation, where we realise our human vocation as keepers of the space, imbued with a new consciousness of responsibility and a reforging of relationships between land, people and Spirit. We may be forced to change; meditation encourages us to act now.