Two paths, one goal: Sufism and the climate justice movement 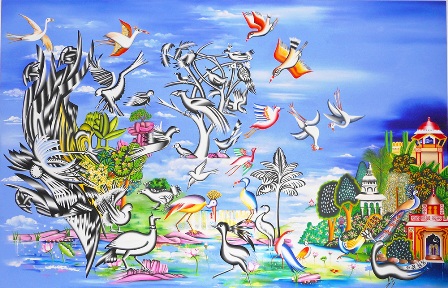 By Daniel Mostovac – presenter at PathWays Coalition for Diversity Education

So says Shaykh Taner, a Teacher of the Ansari Order of Sufis based in New South Wales. Originally from Turkey, Shaykh Taner and his wife Shaykha Muzeyyen have lived in the United States for the past 30 years and have recently toured Melbourne and Sydney, offering talks, meditations and healings. Sufism is a movement that originated in Islam some thousand years ago, often called the mystical interpretation of Islam. However, Sufism today can be practiced in a secular way. The Ansari Order makes no discrimination based on sex, gender, religion or politics, but welcomes anyone in search of peace and truth.

While I have described Sufism as an offshoot of Islam, the practicing members I have met tend to resist categorisation, even detaching themselves from the label of “Sufi.” In doing so, they tend to focus more on the path towards love and peace. This practice of detachment is important today, in a world where it is easy to identify too heavily with labels like jobs or nationalities. It is also easy to compartmentalise the many issues we face; there’s climate change here, poverty there, religious extremism over there. Indeed, Naomi Klein, in her 2014 investigative work This Changes Everything: Capitalism vs. the Climate, has argued that the climate movement could be the movement to galvanise all the others, as nothing threatens our survival more than uncontrolled global warming. So how does a spiritual practice such as Sufism contribute to this issue?

Sufism’s participation in our global environmental crisis arises from a common interest for humanity, as well as a simple and elegant belief that everything is God. This view dates back hundreds of years to a poem written by Attar in the 12th century CE, called The Conference of Birds. In this poem, a series of birds are called upon by a spiritual master, the Hoopoe bird, to seek out their True King, a bird called the Simurgh, who represents God. Along the way, many of the birds abandon the quest, believing that love, fame or riches can be the foundations of their happiness. Yet 30 birds do complete the quest, and find a lake whereupon they are to see the Simurgh. Surprised, all they see is their reflection. It turns out that God, the Simurgh, is in each and every one of them. As Sheikh Tanner says: “everything is Allah,” the sun and stars, the seeds and the trees and the earth. Everything carries within it the divine spark that gives it form, and so we are called upon to Love one another and the world around us.

Artist Roberta Booth’s depiction of Conference of the Birds, robertabooth.co.uk

The Ansaris have been implementing this view in the world of sustainability by founding ASL (Ansari Sustainable Living) nine years ago, and by starting a youth club. I found it encouraging that the Ansaris have been working towards this for this long a time, given that 350.org, the global grassroots movement for climate justice, began only a year afterward. ASL has been raising awareness about sustainable design, running permaculture projects, and providing education on sustainable living. In the Ansari youth club, attendees take on their own projects, such as learning how to grow food. The transmitting of knowledge and practice from one generation to the next is an integral aspect of Sufism, which thrives on spreading wisdom from teacher to student throughout the ages. Furthermore, allowing the youth to manage their own projects encourages rational decision making, an integral aspect of the Sufi path.

The climate movement is as diverse as humanity itself. We have seen this in events like the People’s Climate Marches that took place in November 2015, which saw many different cultures and faiths walking together. And yet these different groups are contributing in their own way, on their own paths. For the Sufis, if we become extinct, then our path to love God and the world comes to a halt. It is necessary to detach ourselves from things that do not bestow happiness in themselves, like wealth, and from labels that inhibit working together. Then the environmental path intersects with that of the spiritual, and we will continue moving toward peace.

For more information on the practices of Sufism in Australia, visit: