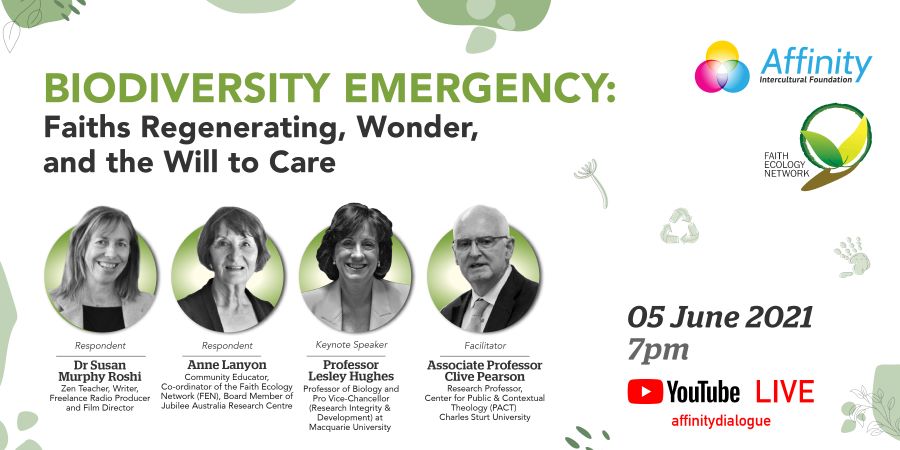 Biodiversity Emergency: Faiths Regenerating, Wonder, and the Will to Care

For too long, we humans have been exploiting and destroying our planet’s ecosystems. We have become disconnected from the natural world. In 1992 1,700 scientists warned that human beings and the natural world were “on a collision course”. Biodiversity loss is now at an emergency level.

Professor Lesley Hughes is one of the authors of a scientific study of Australia’s ecosystems published in February 2021 which outlined the stark situation.

Religions and the sciences have something positive to say to each other as we face this reality. Emerging is a new dialogue across diverse traditions. We are collaborating in regenerating a sense of wonder, learning, and the will for faith and all communities to care for the natural world. We can get on board with the United Nations “Decade of Ecosystem Restoration” which is being launched today, World Environment Day 2021.

This webinar is proudly in collaboration with Faith Ecology Network and Affinity Intercultural Foundation.

Register here to be able to ask a question beforehand, and to be reminded when the event is about to start

Click here to watch LIVE or ot catch up afterwards:

Lesley Hughes is Distinguished Professor of Biology and Pro Vice-Chancellor (Research Integrity & Development) at Macquarie University. Her main research area has been the impacts of climate change on species and ecosystems. She is a former Lead Author in the IPCC’s 4th and 5th Assessment Report, a former federal Climate Commissioner and now a Councillor with the Climate Council of Australia. She is also a member of the Wentworth Group of Concerned Scientists and a Director of WWF-Australia.

Anne Lanyon is a Sydney-Based Community Educator who facilitates workshops on peace, ecology and justice for students, teachers and community groups. She retired as Deputy Director of the Columban Mission Institute and Co-ordinator of its Centre for Peace, Ecology and Justice late in 2017 when the Institute closed. She is currently the volunteer Co-ordinator of the Faith Ecology Network and the St Anthonys Kierans Creek Landcare Group in Sydney. She is a member of the Laudato Si’ NSW Network and a local bush carer near her home. She is passionate about education for a better world, is involved in a variety of peace, ecology and justice groups including on the board of Jubilee Australia Research Centre. Her qualifications are B. Ed. (Australian Catholic University); Grad. Dip. Min. (Sydney College of Divinity); MA.Theol (Sydney College of Divinity).

Dr Susan Murphy was authorised as a Zen Roshi and lineage-holder in both the Diamond Sangha and Pacific Zen Institute in 2001.

Murphy Roshi is the founding teacher of Zen Open Circle in Sydney and Kangaroo Valley (zenopencircle.org.au), and teacher for both the Melbourne Zen Group, and Mountains and Rivers Zen in Hobart, leading regular seven-day Zen sesshin in all three places, and, since 2018, conducting fortnightly online teachings in eco-dharma.

She directed the Reel to Real Buddhist Film Festival in Sydney, 2004-2011, and has been a frequent freelance producer of feature documentaries for ABC Radio National since 2000. She also teaches part-time in the MA in Applied Buddhist Studies at Nantien Institute in Wollongong.

Associate Professor Clive Pearson is a research fellow of the Public and Contextual Theology (PaCT) centre of Charles Sturt University. He was formerly Principal of United Theological College (North Parramatta) and, for a brief time, Head of the School of Theology, (CSU). He is a Fellow of the Center of Theological Inquiry (Princeton).

Clive is one of the three founding figures of the Global Network of Public Theology which embraces the practice of a public theology in 30 universities around the world. He is on the advisory editorial board of the International Journal of Public Theology and the Korean Presbyterian Journal of Theology. He was previously on similar boards for the journal Political Theology and Ecotheology. He was one of the series editors on cross-cultural theology published by Equinox Press (London).

Clive has been involved in the work of Affinity since its earliest days. He assisted in the establishment of the Centre for Islamic Sciences and Civilisation (CISAC) in Charles Sturt University. He oversaw the inclusion of ISRA / CISAC into the Global Network of Public Theology through its inclusion into PaCT. This is the first Muslim presence in the Global Network. He has collaborated in the writing of reports on Islamophobia and Halal certification.