Wonder and the Will to Care and Buddhism  - Gillian Coote 2003

Without wonder we won’t have the will to care for our fellow sentient beings, for the complexities of this earth. Certainly, sustainable effort won’t come from despair, guilt or anger. These are short-term and reactive responses and people who try and change the world from these emotional bases inevitably suffer burn-out. But I think wonder too, runs out, gets stale, no matter how many inspirational posters of tranquil forests we put up in our sitting rooms, no matter how many beautiful wildlife documentaries we watch. It fizzles out unless we have a practice of coming home to who we really are, moment by moment.

We need the patience, compassion and humility that arises when we see ourselves as cells in this vast web of the universe, when we understand that one simple act of healing is never lost. After all, where can it go? Here is short poem by Zen Roshi Robert Aitken:

Watching the spider at work

I vow with all beings

To cherish the web of the universe

Touch one point and everything moves.

The web of the universe. There is a beautiful metaphor for this, the Net of Indra, a metaphor going back thousands of years. In this vast net, there is a drop of dew at each junction of the net, and in this dewdrop, everything is reflected. A more modern metaphor would be the hologram, where each tiny segment contains the whole. And since the l920’s, when biologists gradually discerned that the flow between things – their relationships – were what mattered – systems theory has added scientific confirmation to this fact of interdependence. We belatedly discover that indeed we all partake of one another. That indeed what is done to one part of the earth system affects everywhere else. This is one of the central teachings of the Buddha – paticca samuppada, or dependent co-arising. 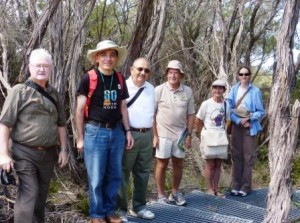 When you transfer this way of thinking and being, you take the logical step of moving beyond anthropocentrism – that man is at the apex of the pyramid and is in charge of everything else. We are certainly an opportunistic species whose needs are currently wreaking enormous havoc on other life forms. But as we do this, we ourselves become diminished. We become increasingly cut off from our home in the physical world. We are not brains on the end of a stick, but an organic, integral part of the web of life.

John Seed, an Australian who works tirelessly to save rainforests round the world says ‘every breath of air we take connects us to the entire life of the planet, the atmosphere. I am part of the water cycle. The sun lifts the water up into the atmosphere and then it comes down, lubricating and giving life to everything. 80% to 90% of what I am is just this water. Everything about our society is based on this idea of ourselves as specially created apart from the rest of nature. As long as we think of ‘the environment’, we are objectifying it and turning it into something over there and separate from ourselves. We humans spent 125 million of the last 130 million years evolving within the forest, and our cells and psyche are infused with the intelligence of the forest. But our whole life is conditioned by an economic system based upon the principle that the earth has no value until human labour is added to it. We think we are the miracle, and we’ve refused to recognise the miracle of the dirt – the earth – which composes us.”

We are living in a time of speeded up species destruction, habitat destruction, moving towards what author Tim Low calls a feral future where opportunistic species will dominate, losing the richness of biodiversity

There has just been another Report on the State of the Environment. If we want to change the situation, we must begin by being our true selves – which means we have to be the forest, the river, and the ozone layer. If we visualise ourselves as the forest, we will experience the hopes and fears of the trees. When we understand that we inter-are with the trees, we will know that it is up to us to make an effort to keep the trees alive – we know if they do not live, we too will disappear very soon. Our body is not limited to what lies within the boundary of our skin. Life is one. We do not need to slice it into pieces and call this or that piece a ‘self’. What we call a self is made only of nonself elements.

This sheet of paper contains everything in the universe – the trees, the sunshine, the rain, the earth and its minerals, the logger, his axe, the petrol for the truck, his food, on and on you go. Before the sheet of paper appeared, was it nothing? Before it appeared it was something else – a tree, a branch, sunshine, clouds, the earth.

When you look deeply into the piece of paper you discover that it is composed of non-self elements. When you look deeply into your own self, you discover that it too is composed of non-self elements that are in constant flux – that there is no fixed, permanent self. And when it is burnt or trashed, it is transformed into smoke, heat, ash – it is returned to the elements again. No birth, no death.

What can one person do in the face of all this destruction and extinction? We need an attentive heart. Zen Buddhists chant the Bodhisattva Vow – though the many beings are numberless, I vow to save them, though greed, hatred and ignorance rise endlessly, I vow to abandon themŠ..

We can choose not to be so greedy. We can choose to practice restraint. We can make a decision to walk to the bus instead of driving the car. One such decision has a powerful impact on the amount of pollution in the air we all breathe. We can choose to make habitat for scrub wrens in our city gardens. We can choose to keep our cat inside so it doesn’t eat the scrub wrens. We can limit the poisons we use in our houses and gardens. We can accept where we live – in nutrient-poor Hawkesbury Sandstone soils – and allow ourselves to nurture the huge variety of species adapted to living in this soil – thus reducing our need for fertilisers, for excess watering, thus we encourage the web of life.

Healing is not isolated. One simple single act to heal something out there,heals the healer – how can it not? The actual self that requires healing includes water, air, and soil.