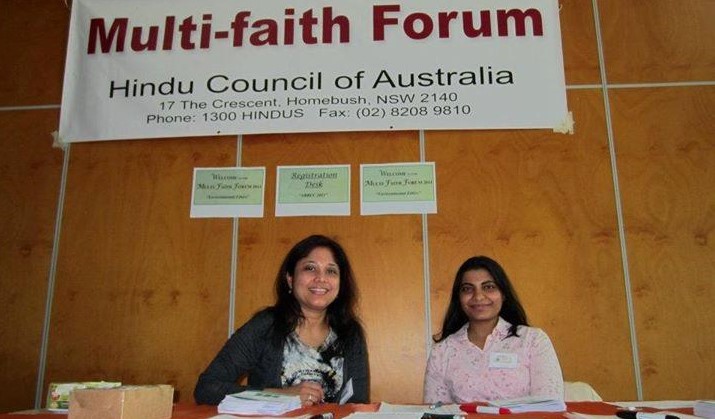 Hinduism is one of the world’s oldest religions and its third largest. Most Hindus are vegetarians, due to their belief in the sanctity of all life and commitment to simplicity. There are about 440,300 Hindus (2016 census) living in Australia and over a billion globally.

Relationship to the rest of the Earth Community

Hinduism is one of the world’s oldest religions and its third largest. Most Hindus are vegetarians, due to their belief in the sanctity of all life and commitment to simplicity. There are about 440,300 Hindus (2016 census) living in Australia and over a billion globally.

Live in complete harmony with Nature,

Experience the grace of God in the splendour of the universe.

Be blessed by God’s reassuring love,

The sweet dawn will sweeten your soul,

The dazzling mid-day will set your hearts aflutter,

And the serene music of your soul will guide you towards peace and prosperity.

And when the day’s task is over, you will sleep in the lap of Mother Nature,

All the deities will be favourable to you.

This is the message of living in harmony with Mother Nature from the Holy Scriptures of Hinduism. It is a pity that we have ignored that sublime message to live in complete harmony with nature and to enjoy the many splendours of the Universe. By our indiscriminate use and abuse of its abundant resources we have spoilt its beauty. Consumerism has been at the core of our ever-increasing desire to possess more and more to add to our so-called comforts for living.  We have complicated our lives and have added lots of mental worries. The ever-increasing demand on our energy resources has led to climate change and warming of the earth’s atmosphere with some drastic consequences.

Mahatma Gandhi, one of the greatest human beings of the recent times had said that there is enough provided by the nature to meet everybody’s needs but not to fulfil the wants of anybody. He led a very simple life himself, living with very meagre personal possessions, setting a living example for the humanity. There is no limit to our wants and that is the basic cause of our problems. The Scriptures have always emphasized that we should control our desires.

“Thinking of objects, attachment to them is formed. From attachment longing and from longing anger grows. From anger comes delusion, and delusion leads to loss of memory. From loss of memory comes the ruin of discrimination and from the ruin of discrimination the person perishes. Hence be a self-controlled man, moving amongst objects of desire with senses under restraint, free from attraction and aversion, attain tranquility and peace.”

The message is to control our desires and thus reduce the demand on precious resources. Conserve energy and help save the environment.

Mahatma Gandhi was also a vegetarian and had propagated the cause of vegetarianism. Many recent health studies have pointed out the obvious health advantages of vegetarian diet. In the Ethics of What We Eat by Peter Singer and Jim Mason write:

“It has become apparent that the human appetite for animal flesh is a driving force behind deforestation, erosion, freshwater scarcity, air and water pollution, climate change, biodiversity loss, social injustice, the destabilization of communities and the spread of disease.”

The authors claim that since European settlement in Australia, 13 per cent of the land has been cleared of native vegetation, mostly for grazing animals. When it comes to feeding the world, an acre of land used for crops could feed about 10 times as many people as an acre for grass-fed beef. The emissions from cows burping accounts for about 11% of Australia¹s total national emissions, or 61 million tonnes of CO2-equivalent per year. Hence, by switching to vegetarian diet we can help save the environment.

There is another aspect of this and that is of animal rights. According to Mark Berriman, Director of Australian Vegetarian Society (NSW): “Over 50 billion animals are killed worldwide each year. It is hard to comprehend. We must develop compassion towards other creatures who at the moment have no legal rights or respect.”

This brings us to another especially important aspect of this issue and that is to do with the pollution of internal environment, our inner peace and tranquility.  Unfortunately, the current atmosphere is full of hatred and mutual fear. We are living under the constant fear of terrorism. This so-called war on terrorism cannot be won through violent means. Violence begets violence. We must find peaceful means to solve this terrible situation. We have to overcome mutual hatred.

Hinduism believes in the unity of all existence. Vedas boldly declare “Sarvam Khalu Idam Brahma – all this is nothing but Brahman”. The Christ says, “Love Thy Neighbour”. Why? The Hinduism provides the answer – because you and your neighbour are one. The same God resides in him and in you. “Ekam Sat Vipara Bahudha Vadanti – God is one, wise call it by many names.” Let us hope and pray that good sense prevails on all of us and we do the right thing to help overcome the damage we have been causing to both the inner as well as the external environment and live in peace and harmony with the Mother Nature.

The Climate Institute (Australia) Ltd in 2006 invited various religious organisations in Australia to submit their views according to their faith on the problem of climate change facing the world community. Hindu Council of Australia (HCA) made its submission on Hinduism’s view on climate change. The Climate Institute published that document entitled “Common Belief – Australia’s Faith Communities on Climate Change”.

This marked the beginning of the involvement of HCA in the Climate Change movement. Its representatives have attended various interfaith Conferences and forums on the subject and have made their contributions.

On 2nd October 2008 (Mahatma Gandhi’s Birthday) HCA with the support of ARRCC (Australian Religious Response to Climate Change) Inc launched a campaign for observing “Meat-Free Day” to tackle the problems relating to climate change, global warming, cruelty to animals and human health. Since then, HCA is actively involved in addressing the climate change problem in association with a number of multi-faith organisations:

Association with ARRCC – ARRCC is a multi-faith organisation committed to addressing climate change issues. HCA took its “Meat Free Day” campaign to ARRCC in order to extend its reach to people of different faiths who are in majority, meat-eaters and named it:     “Eat Less Meat” campaign. The main aim being to reduce meat consumption which is one of the main reasons for climate change.

We were the first in Australia to launch this campaign, since then a number of similar organisations have joined in, namely: Meat Free Mondays, Meatless Mondays, Meat Free Week, Meat Free Fridays, No Meat May, Less Meat = Less Heat.  We have participated with these organisations to further the cause of reducing meat consumption.

There are other organisations which address this issue from different angle of cruelty-free treatment of animals. These are: Voiceless, Animal Australia and RSPCA. We have associated with some of these organisations as well.

Voiceless – an animal protection charity, whose work is focused on raising awareness of animals suffering in factory farming and the kangaroo industry in Australia. Retired Justice of the High Court, the Hon. Justice Michael Kirby is the Patron of Voiceless. HCA Director, Vijai Singhal participated with him as a member of the panel on ABC’s Radio National program: “Sunday nights with John Cleary” on the topic of “Ethics of Abstinence” on 21 Sept. 2011.

Association with Faith Ecology Network (FEN) – FEN is an interfaith network of people connecting faith with ecological awareness and care. HCA have participated as the Hindu representative with FEN since 2008 as active member of its Working Group, participating in its annual seminars, prayer vigils and other promotional activities.

Association with Brahma Kumaris Environment Movement (BK) – HCA have been associated with the BK Centre at Leura, Blue Mountains since 2011 attending their international retreat on “Cities of the Future”, focusing on making the future cities more sustainable.

Association with FoodFaith - FoodFaith aims to build bridges across different faith, cultural and community groups through our shared learnings and practices of food and sustainability. Hindu Council has been associated right from the launch of the FoodFaith initiative in March, 2015.

Australian food labelling laws are extremely poor at pointing out if a product contains beef, which is against the religious faith of many Hindus. Hindu Council has asked for labelling of food items that contain beef.

Image from The Hindu Council of Australia